Raised on a farm in South Western Ontario, Mike McIntosh values the natural environment and its wildlife which he started photographing as a child. Interested in wildlife and their behavior, Mike became fascinated about perceived dangerous “predators” and human’s misunderstanding of these amazing beings. Mike is especially intrigued by bears given their high intelligence and unique cognitive abilities. For most of his life, bears have been Mike’s focus

Mike has been to Kamchatka Russia, walked among some of the largest bears in existence, travelled to Alaska, the Rockies, observing bears and their behavior.

The only weapons Mike feels you need in bear habitat is your brain and a can of pepper spray.

A frequent visitor to the Algonquin Park and area to enjoy and photograph wildlife and nature, Mike moved permanently to the north purchasing an old farmhouse including some acreage (89 acres) with a creek and pond in 1990. Mike volunteered at the Aspen Valley Wildlife Sanctuary (AVWS ) in the early 1990’s helping injured and orphaned wildlife specifically bears. It wasn’t long after assisting at the AVWS that Mike realized there was such a great need to help the black bears and humans coexist. Mike decided he wanted to devote most of his time to helping the misunderstood bear. He approached the Ontario Ministry of Natural Resources and Forestry in 1991 and talked to them about his plans to help orphaned cubs, injured bears and also assist the public with “nuisance” bears, more correctly known as human-bear conflict resolution.

In 1992 with the help of some local friends interested in wildlife rehabilitation plus the cooperation of the Ontario Ministry of Natural Resources (OMNR), the Bear With Us Sanctuary and Rehabilitation Centre for Bears was formed by Mike McIntosh. All began with the first bear in April 1992, a big old blind bear from a zoo in eastern Ontario. This bear named Mishoomish remained at Bear With Us until his passing. Since its inception, Bear With Us has assisted 530+ orphaned and injured bears return to the wild. Bear With Us is a permanent home to a select few bears that cannot return to the wild. Meet Ella McIntosh. Ella has similar passions for bears, wildlife and nature. Mike and Ella work together as husband and wife and partners at Bear With Us Inc. The hiking trails lead the curious people on wonderful adventures. Trails take you through the forest and meadows, follow creeks and rivers, lead you to the lakes or to the top of the mountains. The hiking trails uncover many secrets to the observant person. It can change ones life. My name is Ella McIntosh ,the trails changed my life and led me to the life with bears. As a hiker I had the privilege to live and hike in the prime bear country (black bear and grizzly) of Alberta. I had many questions to the world about bears, the answers provided to me did not match the personal experience I had with these majestic animals. I decided to inquire into contradiction. I decided to ask many questions and seek the truth about bears for myself. The wonderful journey of discovery took me off the regular hiking trails into the places where the animals live in their kingdom. I followed their trails or made my own just to have an opportunity to observe their lives as is. I made friendships with people who were like minded as I, and who were on a similar journey of discovery. I have learned that bears are exact opposite of the character they have been given by people. Once I got some understanding of bears it stopped the fear, the feeling got replaced with respect and appreciation. When you feel like that, you want to tell anyone who is willing to listen since much information they have been told about the bear is not true. My journey of inquire and understanding lead me to Bear With Us , a place where orphaned bear cubs get a second chance at life , a chance to be alive and to be wild as a bear should be. Bear With Us is also a source of education that promotes a true understanding of a way to coexist with bears. My husband Mike McIntosh and I work together at Bear With Us as a married couple. I truly believe that humans can find a way to live in peace with bears if they observe and learn. Learn to be open and understanding. Bears do not create a problem, our behaviour does. We have a lot of work to do regarding the way we think and behave toward bears and other animals. Open your mind and your heart, you will be pleasantly surprised where it may take you. Enjoy the journey. ~ Ella McIntosh Bear With Us Inc. and the McIntosh’s are authorized  annually by the OMNRF (Ontario Ministry of Natural Resources and Forestry) to rehabilitate and release orphaned wild bear cubs, live trap and relocate perceived nuisance bears and keep black bears in captivity.

Mike, Ella and Team do speaking engagements to interest groups such as campers in Ontario Parks, local cub-scout packs as well as schools. Educating people through their presentation “Understanding the Black Bear” is critical to assisting bears and people to coexist .

Mike and Ella do not operate the Bear With Us Sanctuary and Rehabilitation Centre for Bears (charity) alone. Get to know our Board of Directors .

Fulfilling the mission: The four primary areas of operation for Bear With Us are:

1-Black Bear Rehabilitation; orphaned bear cubs and injured bears cared for and returned to the wild in a high state of health.
2-Bear Sanctuary; various species; A comfortable place to stay for permanent non-releasable bears such as ex-circus bears, zoo excess or illegal pet confiscations.
3-Education; (a)-Off location slide/video presentations for groups at Provincial Parks, schools, cub and guides, other young people’s groups, nature clubs and more. (b)-Comprehensive website, Facebook page and a special educational Facebook page for Molly Bear. (c)-One on one phone conversations and email responses to individuals with questions regarding bears.
4-Conflict Resolution; Assisting people and bears to coexist together. Individual consultation with people about how not to encourage or discourage a nuisance bear by removing food attractants, live trapping and relocating individual bears when other potential solutions have been exhausted.

Working to dispel myths and misinformation about coyotes, wolves, bears and cougars, Hannah Barron comments: “Accurate information never robs animals of their magnificence, but robs us (people) of our fear very well!” – Hannah Barron. A biologist specializing in wolves and other carnivores.

“Appreciate, view with respect, allow them to exist, to coexist. The bear will if we will”. – Mike McIntosh

“If you talk with the animals, they will talk with you, and you will know each other. If you don’t talk with them, you will not know them, and what you do not know, you fear. What one fears, one destroys.” ~Chief Dan George

“When we return wild animals to nature, we merely return them to what is already… theirs, For man cannot give wild animals freedom, they can only take it away.” ~Jacques Cousteau

“To say, “Let nature take its course”, is unacceptable because human imposed injury is not natural injury. Therefore intervention regarding wildlife is the responsible action to be taken.” – Mike McIntosh

“I’ve spent most of my life surrounded by incredible beauty, enjoying wonderful relationships with wild animals most of us were taught to fear. We really need to get past our fear of the wild. It’s what sustains us, not what threatens us.” ~ Charlie Russell

“A problem for bears is not so much what we don’t know, it is what we think we know that isn’t true.” – Dr Lynn Rogers.

“One cannot have lived as long as I have, alone in a wordless world that was as wonderful as I had with my bears, without struggling to be courteous in the human world where most people think…that we are superior to every living thing.”- Charlie Russell

" I have always valued the natural environment and wildlife which I started photographing as a youngster. Fascinated by wildlife and their behavior, I became curious about perceived dangerous “predators” and human misunderstanding of these amazing creatures. I am especially intrigued by bears given their high intelligence and unique cognitive abilities."
- Mike McIntosh 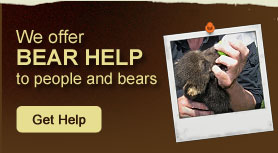